Between the end of the 1960s and the dictator’s death, Pere Portabella focused his production in several complementary directions. On the one hand, he took on the job of directing two of his most personal full-length films, the deconstructive Vampir-Cuadecuc (1970) and Umbracle (1972), both related to the analysis and questioning of classic filmmaking techniques and the workings, specifically, of the codes of fantasy films in the first example, and the breaking of the ever-changing (at least in his hands) borders between fiction and documentary in the second. On the other hand, he threw himself into the making of certain commissions, films financed by various legal organisations, which connected with a nostalgia he felt for the Catalan artistic avant-garde.

This category would include the three shorts financed by the Barcelona Architectural Association, which he made for an anthological exhibition about Joan Miró, which was put on at the association’s headquarters in 1969. Miró 37/Aidez l’Espagne, 1969 (also known as Miró de la guerra) is a black and white short with a colour sequence at the end (actually a shot of the famous picture Aidez l’Espagne, painted as propaganda during the civil war) and lasts only five minutes. It is worth recalling that it was made the same year that Basilio Martín Patino finished his extraordinary film Canciones para después de una Guerra (which was only shown after the dictator’s death) and incidentally showed up the almost complete inability of the regime to accept any kind of critical revision of its historical legacy through documentary material.

As with Patino’s film, a series of images are being played with here in order to provide a different meaning from that which the anonymous documentary film-makers who originally made them were looking for. Miró 37 works through the manipulation of sequences alternating Franquist parades “jazzed up” by military marches, pictures of cities being bombed, militant republican demonstrations and even the funeral of anarchist leader Buenaventura Durruti along with a third level of images, quick sometimes brilliant shots of Miro paintings, reminding the viewer of the tragedy of war: bared teeth and searching eyes seem to stare at the documentary pictures the viewer himself is also seeing, unsupported by any commentary (a technique which Portabella would scorn in most of his documentaries of this period). This, together with some familiar symbols from republican / progressist imagery (the Himno de Riego, the International), all creates a quick, understated record of defeat and permanence.

Excerpt of the article “Aimez-vous la répresentation? Notes of the Cinema of Pere Portabella and on Informe general”, written by Casimiro Torreiro, and published in Spanish Cinema. Modes of Representation, Minneapolis, University of Minnesota Press, 1999, pp. 301-319. 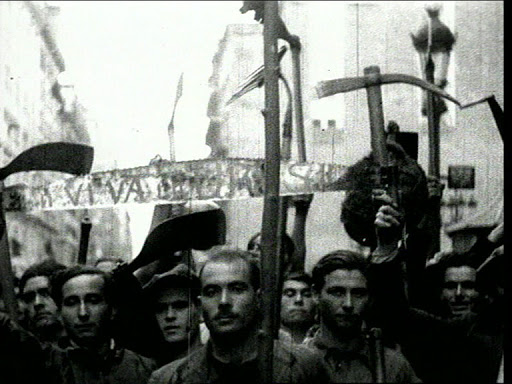