To say that a script is only a fleeting form (an instrument, a journal, a schedule, or an itinerary of situations, places and stages), and that it has nothing to do with literature, is almost too obvious an assertion. A script is both a suite of sequences—interrelated by poetic associations, suggestions or resonances—and it is nothing at all. But this has always been my means of confronting cinema’s language. The narration of a film begins and ends with a film’s screening, and there is nothing before or after. Before is a blank sheet and, when the projector is turned off, after is a white screen.

It was from this standpoint that I’d first asked Joan Brossa for his involvement and collaboration. Obviously, I needed a poet; he loved cinema, we knew each other well and, without much discussion, we often in accord. The result of our discussions, Don’t Count on Your Fingers, was a real exercise in freedom. During production, I respected the literary origin of some of his ideas and gave them a different treatment so as to highlight the interdisciplinary nature of the film’s structure, but Nocturne 29 was the consolidation of our shared language—indicative of a system and an internal logic adapted to my purposes as a film director.

Brossa was the ideal interlocutor; we worked through dialogue, and the most literary and cinematic ideas were exchanged in a fluid and stimulating fashion. We would suggest an image, a fact, an action and, as we went along, these images were fixed in place and order, informing an emergent suite of sequences. Both the beginning and the end of the film appeared unexpectedly, but in some irrefutable way. The process was only over when there was nothing more to do. A seamless and very gratifying sensation.

Brossa, in addition to being one of the most interesting and striking poets of his period, had a sensitivity and a receptive capacity that made him an extremely rigorous and acute reader-viewer. Painting, cinema, music … all were present in his day-to-day literary activity. He fed voraciously off one or another of these artistic activities and, from the outset, his critical vision and creativity was decisive for many. The lucidity and, above all, perseverance with which he expressed his opinions was both spectacular and formidable; and his personal involvement, subjectivity, and straight-forward manner gave him authority and strength.

Sometimes he was witness to our shooting; everyone appreciated him, and his sense of humour seduced the whole team. While I was preparing and adjusting a take, I’d offer to let him look through the camera’s viewfinder. He’d react in a childish way, as if he were in an amusement park looking at the world through a spyglass. He just enjoyed it. If it worked, good, if not, fine. He was a writer, above all, and not a filmmaker. A great cinephile, but dialogue, text and title were his thing. Watching his pencil, I was taught to adapt to the needs of a script.

He’d had his fixations—some of which he shared, and others he didn’t—but was obsessed with transformation, sometimes to incomprehensible extremes, and his passion had a name: Fregoli. An actor from the music-hall era. On one occasion he asked me to have a poster from one of Fregoli’s shows in a scene; it didn’t matter where, just that it appeared. I was about to use it to move from one sequence to another, just to satisfy him, but it didn’t work. I hung it where it would appear in a panorama, but Brossa considered that his idolized actor underserving of such a place, much less that he should merely be regarded as scenery, and he regarded it as an insult. For him, this left the film a little tainted.

During Nocturne 29, an image of a burned forest appears. No forest was burned during the shoot, but the burned forest appears, nonetheless. When Brossa saw the film, everything was divine until we’d reached this scene. The burned forest. There was no smoke and, without a little smoulder, he said he didn’t understand the image. He never really considered the film entirely finished from that point and, after that, he didn’t want to see any more of my movies, at least that is how it seemed to me. But I must say that I relished Brossa’s radicalism; always admired it and, when I went off on my own, our collaboration changed the diction of my work. He has always been a solid reference point and an endearing and comforting presence. I was very lucky just to know him, and his alliance with me in my filmmaking debut was a privilege.

Article by Pere Portabella on Joan Brossa written in November 2000. Translated by Cameron Griffiths and published in 2021 by Tenement Press at: 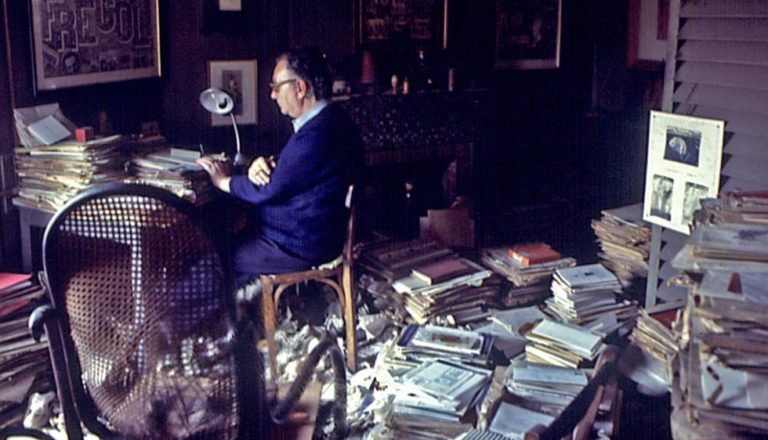