If Glauber Rocha had been forced to film a commercial for Levi’s, the result would have been very similar, visually, to the first sequence of Nocturn 29.  The open landscape in which the action takes place is like the scenery in Serrato in several of this Brazilian director’s films:  dry, rough and hostile.  And that is not all;  the recourses in accentuating these traits are also similar:  Overexposed images, burned and burning light, well contrasted black and white.

Even the movements of the camera travelling over the faces and bodies in a relaxed manner and in close up shots are also Rocha-like.  But the characters that interact with the scenery are not like those from the Glauber Rocha universe but quite the contrary.  They look like they have emerged from a glamorous commercial.  Two twenty-year-olds, a man and a woman, happy, upper middle class, carefully sloppy, conventionally beautiful, searching for themselves in the immensity of the landscape, moving seductively.  He helps her remove a splinter from her foot, she helps him undo his jeans.  These twenty-year-olds, the feeling of affected freedom and rebellion, those calculated movements, the many close-ups of their jeans, are all publicity elements.

And this similarity to a commercial is not involuntary or the fact that it looks like a commercial to us today but didn’t in 1968.

Portabella is fully conscious that his films take a great deal from commercials.  He himself says about No conteis con los dedos (Don’t Count with your Fingers), a medium-length film shot before Nocturn 29: “The film has as a narrative structure the same norms as publicity commercials.  The film’s 28 sequences each have an autonomous action enclosed within itself, and a unity in time limited to the several durations of the spots:  from 15 seconds to 2 minutes”.  Although in No conteis… the commercial-type atmosphere is much more explicit, evident and systematic, in Nocturn 29 Portabella returns to the same structure, but he stretches out the sequences (that don’t have either such a short or prefixed length) and he makes them evidently less  publicity-like.

Up to here, the first part of the equation of both films:  borrowing the publicity format.  The second part: destroying it.  Taking an aesthetic piece to subvert it from within.    Going back to the first sequence of Nocturn 29, we find that the sound goes explicitly against the logic of commercials.  While the happy twenty-year-olds interact with the Rocha-like scenery, the only thing we hear is the clatter of a projector.  In other words, the mechanism is in evidence.  The sound destructures the sequence.  If what we were seeing were really a Levi’s commercial, it would be ineffective.  You can’t sell something and show the sales mechanism all at the same time.  Reminding the spectator that what he is seeing is a commercial, that it is a movie and that the images were produced and are being projected, would be counterproductive.  It is not that commercials cannot be self-conscious (today commercials…);  it’s that they can’t do it so radically.  A commercial calls for a certain ingenuity and transparency.  A car commercial, for example, cannot reconstruct how the image of the car they want to sell has been digitally retouched to make it more attractive.  Therefore, the constant clatter of the ever present projector in the first sequence of Nocturn 29 goes against the logic of the images.

In No contéis con los dedos this (disnaturalization, destructuring and destroying the logic of publicity and making it evident) was all that was done.   Nocturn 29 goes even further.  In other words, it destroys even more.  To begin with, it destroys the codes of traditional narrative cinema (they are also destroyed in No Contéis…, but since it is a medium-length film and the sequences have a more evident coherent logic, there is a much stronger effect of cohesion and stability).  After the first sequence of Nocturn 29, neither the twenty-year-olds nor the desert scenery appear again.  The following sequences are not narratively related with the first sequence or with each other.  Which is to say, they are independent narratives.  Not even the publicity style persists in all of them.  If Nocturn 29 is a surrealistic film it is so, more than for any other reason, because of the strange cohesion of its sequences.  Therefore, more than surrealistic images (explicitly strange images or a rush of images with no continuity) or scenes (a temporal space logic diffused within one same sequence), they are surrealistic sequences.  This produces the uncomfortable sensation given by the film, as if you were always arriving a little bit too late.  In fact I did arrive at the theater a little late for Warsaw Bridge (that has the same structure as Nocturn 29), and at first it did not seem to be a strange film.  I only felt like I was missing some information and that after a few minutes I would recover lost time and understand what was happening.  That never happened.  That moment never arrives in Portabella’s cinema.  You never entirely know what is going on.  His cinema is practically empty of information.  For example, the scene where Lucia Bosé climbs up several floors of an abandoned building and confronts a piece of furniture (or something) covered by a sheet without knowing what is underneath.  It is constructed like a suspense scene, but the suspense is purely formal.  Since we do not know why she has gone to the apartment, or what the apartment is or what is underneath the sheet, or in reality who she is, the scene makes us feel more perplexed rather than in suspense or with a feeling of terror or mystery.  It is almost an educational sequence: he is showing us, in detail, how a suspense scene is constructed.

If you have read up to this point you may have the impression that Portabella is an extreme, disrespectful, destructive filmaker; a punk filmaker.  And, in a way, he is.  Except for one thing.  Messyness – something usually associated with punks but which is completely absent in his films.  If Portabella is a punk filmaker, he is the most elegant of them all.  He is the one who demonstrates, destructures and destroys firms, mechanisms and discourses while he frames with the mathematic virtuosity of Antonioni or Resnais, photographs with the violence of Glauber Rocha, edits with the revolutionary intelligence of Eisenstein and moves the camera with the sophisticated arrogance of Fellini.  He is the one who can straighten his tie while he breaks cinema and the world into pieces.

Article written by Ezequiel Schmoller about the film Nocturn 29. It was published in the catalogue of the 8th edition of the Buenos Aires International Independent Film Festival (BAFICI) on the occasion of the film retrospective dedicated to Pere Portabella. The retrospective took place at the festival and at the Museo de Arte Latinoamericano de Buenos Aires in May 2006. 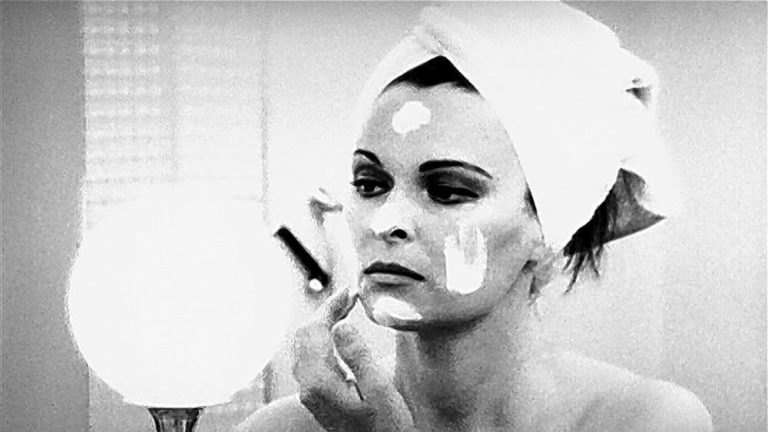