It is impossible to hold your breath for twenty minutes, you can however imagine that what you are seeing lasts for a whole suppressed intake of breath. The camera moves this way and that while it follows the process of emptying the Huerta de San Vicente of all its contents; paintings, pieces of furniture, carpets, flowerpots, crockery and a piano  – thus leaving the building bare, stripped and naked. It then shows these objects wrapped in semi-transparent plastic being taken to a storehouse and left.

The Huerta de San Vicente, summer residence of the García-Lorca family from 1925, found itself uninhabited in 1939 when the family left for exile in the United States after nationalists killed Federico García Lorca in August of 1939 and Manuel Fernández Montesinos, city mayor and husband to Concha García Lorca, several days before. It is necessary to know these facts if you are to understand why Portabella’s film stops at the exact moment of exit, removal, eviction, expropriation. The film’s title could have come from any of these more judgemental, social terms. However the director has chosen the name Removal, it being familiar, full of classical resonance and Spanish baroque in style – a name which evokes the past and conveys destiny as well as the wheel of fortune.

My good friend Mariano Maresca believes that the film is so superb, so contained that it allows for the maximum level of freedom of thought. It brings about such an effect in just twenty minutes without saying anything, while in fact conveying everything. And not in an explicit way either: Portabella limits the film to transmitting (or building, the soundtrack) the rustling of sticky tape on the first painting taken down after an exploration of the property’s grounds, the image bathed in light. What’s more, neither does he mind the allegory being difficult to decode, as when workmen, making banal and work-related comments – reminding me of the gravediggers in Hamlet, Rosenkranz and Guildenstern – put a portrait of Federico dressed in a yellow bathrobe into a box and close the lid. Or when the scene in which they dismantle Federico’s bunk-bed calls to mind the poem, “Llanto por Ignacio Sánchez Mejías” (“Lament for Ignacio Sánchez Mejías”) (“A coffin with wheels being the bed”). The fact is that this elegy kept returning to me while watching the film. This is what I made of it but who knows what others will think. All I can say is that the verses came back to me – the death of the bullfighter friend mirroring the emptiness of the house. Maybe it was just too obvious to equate the lament, “¡El toro solo corazón arriba!”  (“A bull’s heart alone lives on!”) to the dismantling of the piano, which when vertical acquires the vague black Spanish form of a bull’s skin, but that’s the way I saw it. The same as when viewing  shots of the whitewashed walls and the empty house’s green doors, images of Mondrian, Morandi and Chirico sprang to mind, together with the verse “Oh blanco muro de España!” (“Oh white wall of Spain!”). As a viewer, with memory and culture, I can form all of these ideas myself alone.

Throughout the film I continue to hear, without let up, the lucid and breath-taking “Porque te has muerto para siempre” (“Because you have died forever”). At the end all elements are covered, sealed, imprisoned, as if in polystyrene clamps, and taken to a storeroom. There they wait, just like Lorca’s papers had to wait until 1954 to be edited in Spain. The viewer sees forms evoking deceased nature. (Cards have even been created of each object from the house mounted on a dark background, which bring to mind the austere still-lives by Sánchez Cotán). Fortunately you can follow until the very end the analogy of the poet’s confrontation with the bullfighter. In all this you appreciate the poet’s obligation to Ignacio, and now Portabella’s to Lorca, his family and home;

Nobody knows you. No. But I sing to you.

I sing to what was your profile and grace. 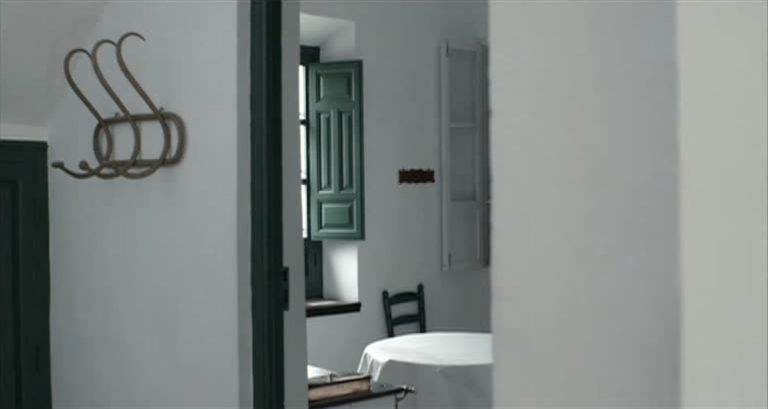